Many BMW “Oilhead” riders spend big bucks chasing more horsepower with expensive exhaust systems, magic Motronic microchips, even camshaft and head modifications. I’ve wondered whether many of these riders have defined what it is they want to “improve”?

I don’t know about you, but absolute high RPM power is NOT why I purchased a BMW. Superior broad torque, “user friendly” power delivery and fuel economy is what I seek in an engine. Top speed advocates often perform expensive modifications to a BMW for only a modest peak horsepower increase. Then the machine may be less rideable and reliable on the street. Not my style, thank you! I prefer strong roll-on power for normal every day commuting, sport riding and touring.

When I learned about a simple way of getting almost 5 more peak midrange horsepower from my ’94 R1100RS while increasing and smoothing power delivery from 3000 to 6500 RPM for less than $35, I was all ears! Here are the facts.

Anthonie Mans posted an interesting test on the Internet BMW Riders/Oilheads lists performed by “Das Motorrad”, a European motorcycle magazine. All that was done to a stock R1100RS (same engine as in the RT) was to give it a dynamometer baseline run and then replace the intake manifolds (black tubes connecting the airbox to the throttle body intakes) with those from a GS. Then they dyno’d the RS again. Here were their reported results in Newton Meters of torque and Metric Horsepower: 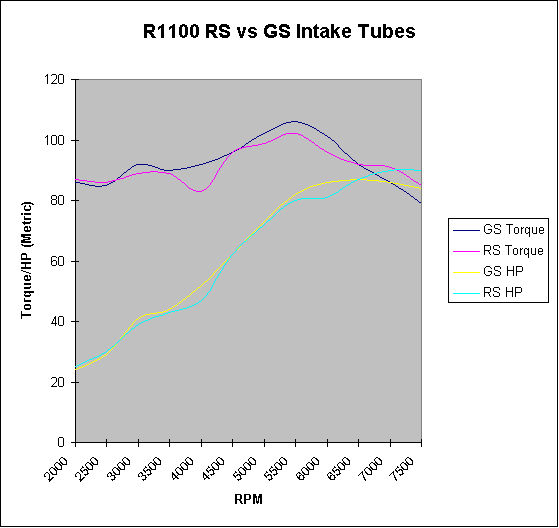 If you look at the chart of these torque and horsepower curves you will notice a much smoother power delivery across the RPM range and an average power increase of 2.28 horsepower from 3000 to 6000 RPM – right in the meat of where most of us ride. But would the dyno results pan out on the road? I purchased and installed a set of these manifolds to find out.

Part numbers and cost for the GS tubes (manifolds) are:

To install the new tubes you will find it easiest to remove the throttle bodies from the rubber cylinder head intake manifolds. Loosen the two clamps that secure each end of the RS intake tubes and then loosen the manifold clamp. Push the tube/throttle body assembly slightly into the air box to achieve separation of the throttle body from the manifold. It’s now easy to separate the throttle bodies from the intake tubes and replace the tubes with the GS types. Be careful to align the non-symmetrical GS tubes with their casting indices aligned up and down with the throttle body casting marks. The GS tubes are also (as the part numbers indicate) different for left and right as opposed to the identical RS tubes, which may be interchanged. Reinstall the throttle bodies into the manifolds, observing the index “tang” alignment. Double check the tightness of all six clamps you loosened to do the installation. Following installation, perform normal throttle body synchronization though the adjustment may hardly change. By the way, this modification will not affect “Zero=Zero TPS Adjustment” of the Throttle Position Sensor if previously performed (re: “Bench Wrenching”, BMW Owners News, May 1997).

For an example of one Prezz’s installation with photgraphs, click here: <http://members.macconnect.com/users/k/karl/bmwgstube.html>

So how does this $35 “hop-up” perform? Here are the plusses and  minuses:

First, Jon Diaz (who performed the mod to back up my data)…

“Rode to work today. Bike seems livelier from idle to 5K … really seems to jump up off the bottom. One big thing I noticed was the increase in intake noise … even with earplugs in, its a lot louder.”

My take, after an initial 500 miles of testing …

Average power delivery is smoother and stronger from idle to red line. – Marginally less fuel consumption (at steady speeds). – The bike is easier to ride!

Acceleration from 6500 RPM in 5th gear to top speed is reduced from RS levels.

If the GS intake manifolds worked so well, how effectively would fuel injection reprogramming optimize the system even more? Having experimented with the Motronic fuel injection on my RS, I knew there were six different “maps” stored in the computer which are activated by different “Cat Code Plugs.” So, to complete the GS intake “clothes” makeover, I replaced the RS yellow Cat Code Plug with the GS pink unit. This connects different coding plug terminals and activates the GS map instead of the RS’. The coding plug is located in the electrical box under the seat, one row forward of the fuses. Look in your owner’s manual for reference. If you replace (or even temporarily remove) the coding plug, you should pull the 5th fuse from the left of the fuse bay for a few seconds and then reinstall it to reset the injection memory and clear any “faults.”

Part number and cost for the GS Cat Code Plug is:

So, how did BOTH the GS manifolds and coding plug, all for ONLY $39.38, work in my RS? To find out I went on a 580 mile loop from Tucson through the Arizona high country, a varied ride that encompassed Tucson’s 2600 feet altitude all the way to the “Rim Country” at 9200 feet. This route is along the famous “Coronado Trail”, US 191 (formerly US 666), and it was a superb workout of low and high speed cornering, accelerating, and trailing throttle, especially coming back home to Tucson through the Salt River Canyon. Verdict?

I was very pleased with the improvement in throttle response, low and mid range power, and about a 3-5% increase in fuel economy! I noted smaller throttle openings for a given cruising speed and reduced backfiring that my RS had always suffered from with the Staintune “touring” system I have installed. With smaller throttle openings for a given load, accurate throttle body synch adjustment will be more important. The motor is also a little bit cranky on cold startup, probably related to more ignition advance at idle settings. Nonetheless, I was delighted with the results!

In summary, I think the GS intake manifolds with GS Cat Code Plug is an effective and inexpensive modification that will give an RS/RT more “grunt” where most riders need it, with little top end sacrifice. Heck, do most of us really need increased performance above 6500 RPM (120 MPH+)? That’s where the above reported horsepower figures intersect. I’ll settle for “real world” roll-on improvements with inexpensive BMW parts!

Final Note: This modification does not apply to GS and Roadster models. They already come delivered with these intake manifolds.