The following instructions were used successfully to remodel the stock seat on a 2001 BMW K1200LTS for greater rider comfort. This is not the heated version of the seat and I strongly recommend you not try modifying the heated seat. Few people enjoy sitting on logs for long periods of time but that’s what they get using a stock LT seat. The following instructions provide an alternative to expensive custom seats. However, use of these instructions implies no warranties nor guarantees. Proceed at your own risk.

Please read through these instructions completely before starting work.

Armed with confidence after reading another rider’s instructions on how he modified his stock seat, I took the plunge and modified my own 2001 BMW K1200LT.

Thought others might want to consider doing so as well so here are the details.

The objective is to trim the top of the seat’s foam core from a rounded/concave log shape to a flatter one, like this (you’re looking at the seat from the front).

Please excuse the hokey graphics but, hey, what do you expect from something that’s hand-drawn!!! <wink>

Be sure to cut with a downward angle, as shown above. If you don’t, you won’t be able to take off enough to make much difference and you won’t leave an open area for your tail bone, which is crucial for comfortable long-distance riding.

Here’s the bottom view of the finished job. You can clearly see the old black rivets along the “top” and the new silver-colored rivets along the sides. The new ones begin to the right of the large white round label on the right upper portion of the seat pan. You can also see, in that same area, the seam in the seat cover that marks where I stopped drilling out the old rivets. 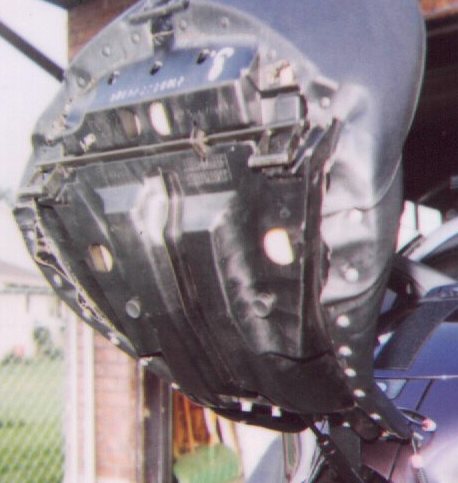 Here are photos showing how flat my finished seat now is. I placed the straight-edge on the seat in two positions (one slightly forward of the other) to demonstrate the flattened area of the previously-logged-shaped seat. 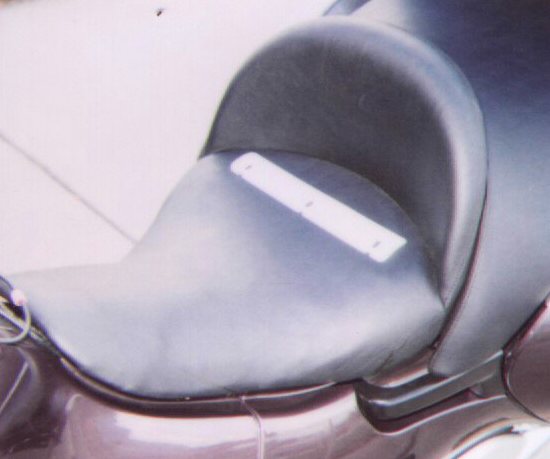 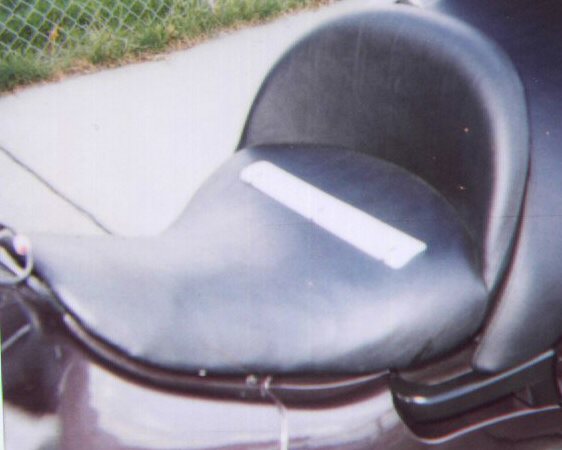 The following photo demonstrates the removal of a small amount of the edges of the seat pan where my legs go. I marked the general area with the straight-edge. Look just below the straight-edge and you can make out how the seat now indents slightly (just where the seat greets the Tupperware side cover and just above the seam in the Tupperware). 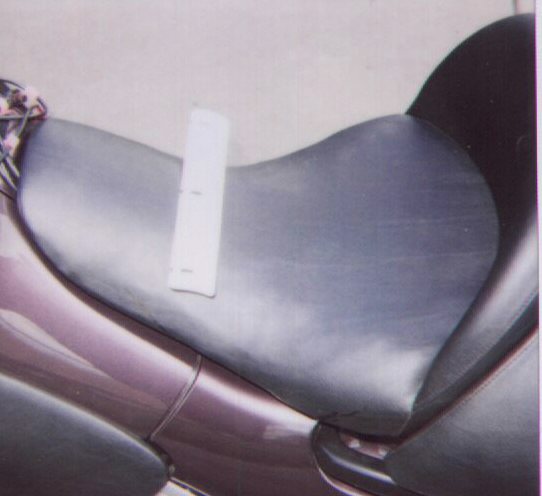 This completes the instructions on modifying the K1200LT stock seat. I just got through riding for about eight hours with about three stops where I dismounted the bike. Other than that, I was in the saddle the entire time. After about four to five hours, I had to shift about on the seat to keep my bum from hurting and I did stand up on the pegs occasionally, but that’s just one heck of a lot better than the hour to two hours I had with the stock seat before the modification!!! Enjoy!