This article explains how to replace the rear section of the front mudguard on an R1100RT with a butchered R1100GS front mudguard. Why would anyone want to do this? You are probably aware that good throttle body synchronisation is crucial to getting the best from the R1100 engine. One thing which can easily mess up this synchronisation is debris in the throttle pulleys. These pulleys are located one each side, just above and behind the cylinders.

Recently my bike began surging horribly. I took it to my dealer and a small piece of grit was found to be lodged in one of the pulleys. I was told that the R1100RT is particularly prone to this due to the way the bodywork tends to funnel debris thrown up by the front wheel towards the pulleys. One thing which may help to alleviate the problem is the fitting of a mudguard extender, but my dealer suggested replacing the rear section of the front mudguard with the back half of an R1100GS front mudguard. The service manager said they had never found debris in the pulleys of an R1100RT which had this modification. I asked my dealer to go ahead and carry out the modification. When I collected the bike I was very pleased with the results. You would never know the part was non-standard unless you were intimately acquainted with this model. Since then Mark Patrick has carried out the modification himself, based on instructions supplied by my dealer. He is also pleased with the results. “The cost was low, the installation was easy, and it looks factory. No real downside.” Below is his account of the procedure.

Here’s your dealer’s instructions that you sent me:
> First, remove the front wheel. Note that the fitting holes are identical
> on both parts, so it should be fairly easy to see what you are aiming at.
> Looking at the GS part from the side, you need to cut it where the ‘horn’
> rises towards the front. Cut it at an angle so as not to weaken the
> mounting points. Then offer up the GS part to the RT part and line up the
> holes where it fits to the fork stanchions. Mark where there is a hole in
> the RT part where it fits the crosspiece (fork brace) and drill a 1/4″
> hole in the GS part.

Here’s what I did (in some detail): I purchased part number 46 61 2 324 395 “Low Mudguard” for $27.43. I found no need to remove the front wheel. The front fender (painted portion) of the RT is held on by 4 screws, the top two of which fasten through bushings and mounting flanges on the fork and tighten into “clip nuts” on the front of the mudguard. Remove these four bolts and the two bushings. The mudguard will now be held by a single hex bolt which fastens upward into a cross member of the fork. This bolt is easily removed with an end wrench. This completes removal of the old part.

To cut the new part, I used a hacksaw which cut the plastic material quickly and easily. I began my cut well forward of the mounting holes and proceeded around the piece. The “horn” makes a nice guide for the saw blade once you reach that portion of the part. Be certain to leave the lower portion of the shoulders on the piece you are saving, as they will wrap perfectly around the front of the fork legs and do much to provide a nice, rigid installation. While this procedure may sound a bit difficult, it is quite easy to understand with the part in hand.

The new piece will have one large hole (maybe 1/2″) and three smaller (1/4″) holes which are not used in this application. The RT part has the corresponding large hole filled with a plug. I transferred the plug to the new piece. I assume this hole is for some alternate or obsolete use. I purchased 1/4″ plugs for the other three holes (obviously used for mounting to the GS) at the hardware store. They were called “Auto Trim Fasteners”, or something similar, and appear to match perfectly in color. I shortened the protrusion on the two used near the tire to assure no contact with the tire would occur.

At this point, I tried to determine the location for the to-be-drilled hole as you suggested, but did not feel I could do so accurately because the shapes of the parts did not allow tight contact. Instead, I temporarily mounted the part to the bike by simply sticking the bolts through the two bushings and through the holes in the new part. This actually held it quite securely because the bolt holes are round with little play, and because of the aforementioned “shoulders.” The top of the piece will have to bend down a bit to fit, but this does not appear to be a problem. With the part positioned as described, it was easy to mark the spot for the hole from underneath. It turns out that the part has a molded-in box with part number type information in this location, and that the hole falls right on the rear-most line of that box. There is also a “nub” from the injection molding process a bit to the rear of this spot which is centered on the piece. These two bits of information would make it very simple to locate the hole for a repeat of this process without having to temporarily position the part. I put a small indentation in the plastic with a sharp punch and drilled a 1/4″ hole.

Transfer the “clip nuts” to the new part. Install the new piece by screwing in the top bolt only a few turns, then fasten the two front points hand tight (using bolts and bushings, but not using the front painted fender yet) so as to achieve an accurate positioning. The top bolt may then be tightened. (See photo of installation progress at this point.) Remove the two front bolts, position the painted fender, and reinstall them using blue Loctite. This is the only step where removal of the front wheel might have made it slightly easier.

Because the new piece needs to bend a bit to install, it requires some upward pressure to line up the nuts with the holes. I was able to fit my hand between the fender and tire to accomplish this with little difficulty. I installed and snugged the two lower bolts (down near the axle) before final tightening of the top ones. The new part has a raised portion in the center where it would mount to the GS. I was concerned that this would not look good, but once installed, it is not at all objectionable. It is right at the rear of the fork cross member and probably adds to the rigidity of the installation. 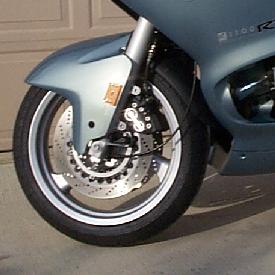 The front portion of the bike with the original mudguard still installed. 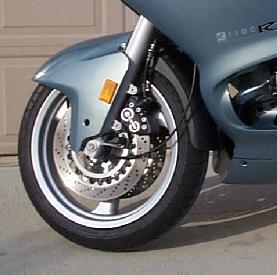 The front portion of the bike with the new GS mudguard installed. 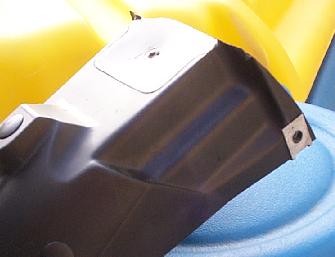 –
The rear portion of the GS mudguard after cutting. This is the piece that will be installed on the bike. Note that a couple of the “plugs” are visible in this photo. 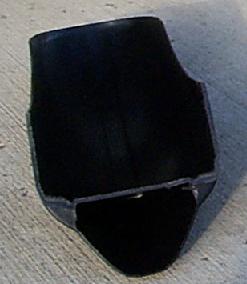 –
The front portion of the GS mudguard after cutting. This piece is not used, but the photo shows how the cut lines up with the “horn”. 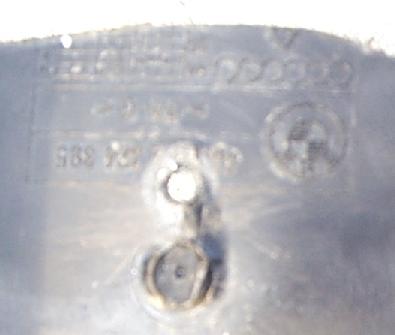 A close-up of the underside of the rear portion of the GS mudguard, near the cut edge. It shows the proper position of the hole to be drilled: right on the line of the molded-in box, and centered (lined up with the nub left from the manufacturing process) on the fender. 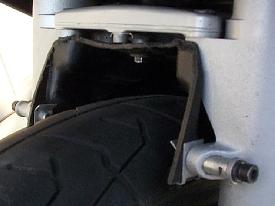 Shows the new part being mounted. The two front lower fasteners are temporarily installed and the upper bolt has been tightened at the time the photo was taken. (click photo for a larger pic)