The $1.98 Hardware Store Special
GPS Mount for a Garmin III Plus

During a discussion on the list about alternatives for mounting a GPS, I commented about my $1.98 hardware store special for my 1995 K75RT. Below is what I sent in response to a request for photos … this idea or something similar can be adapted to any BMW that has fairing mounted mirrors but also has handlebar holes for the stalk mirrors – like my R100RT.

And even if you do have stalk mirrors, you might still be able to put a bracket under the stalk …

I keep telling myself this is only a temporary setup … but I’ve been saying that for 9 months now. It works! 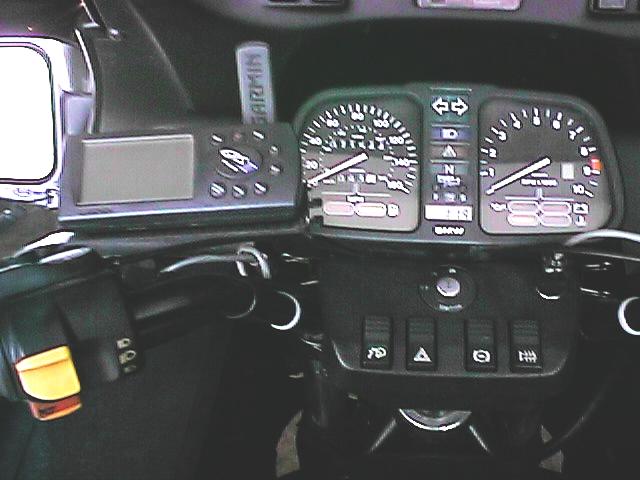 This is the view from just about eye level while in riding position. You can see the bracket under the GPS and how it curves over the fast idle (choke) lever. Look closely at the right side of the GPS just under the speedometer needle and you’ll see the bracket hooks. I was going to break them off to make the whole thing look better, but I never did … and they aren’t in the way anyway.

The bracket is black, so it fits nicely in appearance. The gray wire on the left bar is the GPS power cable, which is plugged in on the right side in the “dash” power outlet. It is, ahhh, ‘temporarily’ fixed in place by the white zip ties (didn’t have black at the time :). 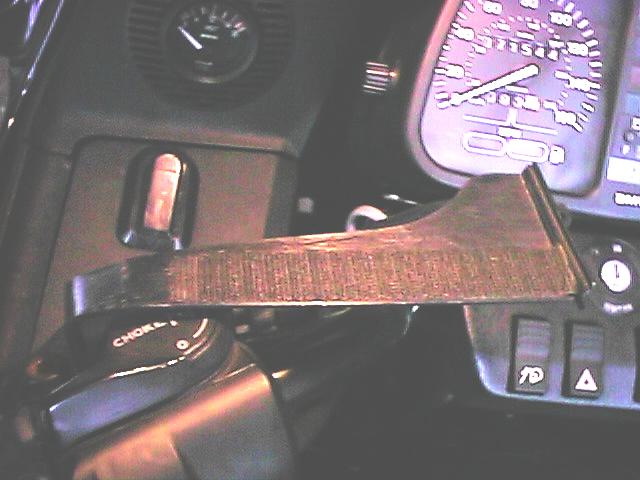 This is as close as I can get to the bracket and still keep a full view. It shows the two bend points on the left. The first is the sharp turn off the vertical rise, the second is the twist to make the flat part horizontal. (You’ll see more about this later.) Notice the strip of 1 inch Velcro. That’s all it takes to keep the GPS secure over even the roughest roads! (Although, I also *always* loop the wrist lanyard over the bracket as insurance.)

If you do this, be sure to use the ‘hook’ side of the Velcro (the stiff/sticky half) on the bracket and the ‘loop’ side (the felt/fabric half) on the GPS. Otherwise the GPS will try to stick to everything it touches.

I’ll mention again the color is flat black … it looks brown because I was using an incandescent droplight for extra illumination. BTW, the obelisk looking thingy on my fairing pocket is another hardware store special – an adhesive backed spring clip to hold small notes, or dollars for bridge tolls, or motel room keys from the office to the room, or whatever. 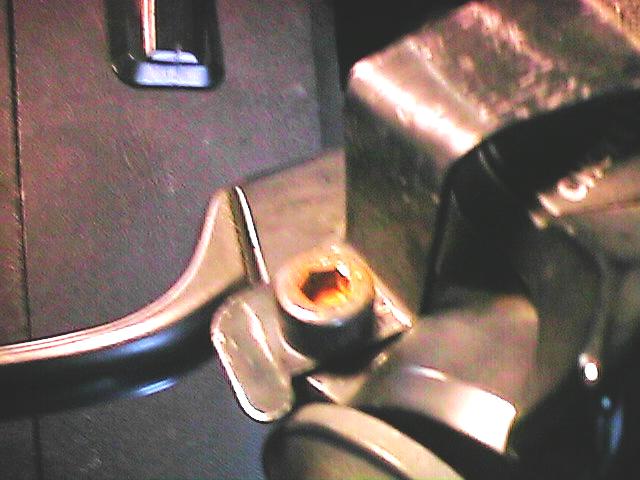 This shot is a little fuzzy because I am overzoomed on the macro lens … but I had to do that to show you the bolt hole is OFF CENTER. <sheepish smile on> This is the second bracket I tried … </sheepish smile off> The first time I drilled the hole in the center and was unable to fit the bracket into the limited flat space over the mirror stalk hole.

You could break the tab off the end of the bracket, but it won’t make any difference with the fit, although I probably would break it off if I did this again because I can feel the tab being there when I cover the clutch with my fingers. In order to have the other end of the bracket extend as far as possible toward the center of the bars, you want to keep this end as short as possible. CAREFULLY measure the minimum amount of clearance you need for the head of whatever bolt you choose BEFORE you bend the bracket. (I goofed that the first time too.) Here I am using a black allen head metric bolt with a plastic-lock nut. It looks like a stock fastener. 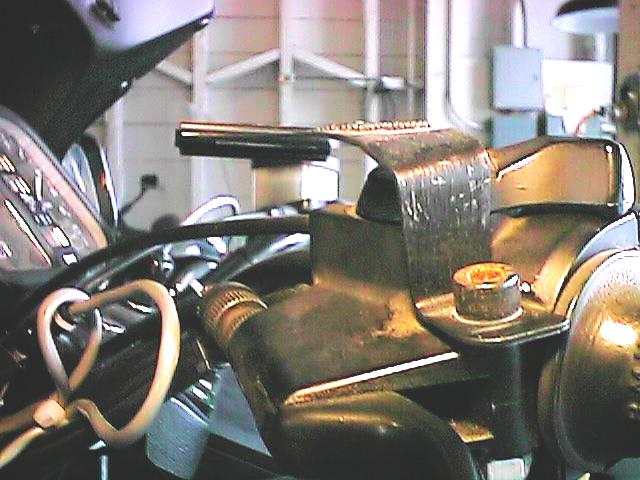 The side view shows the slope of the clutch assembly into which the bolt is fixed, and the second bend point (the twist) to make the flat part horizontal again. Notice also the first bend off vertical is slightly diagonal – it is not orthogonal across the plane of the bracket. The first time I did this, I made it straight across and I had to really twist the second bend a lot … it never came out the way I wanted. This time the diagonal bend gave the rest of the bracket a little head start on the upward angle and the twist was easier and less severe.

Again the gray power cord is visible on the left. I left a loop when I zip tied it, and I keep the free end tucked in as shown when I am not using it. The Garmin power cord was made for me by (IBMWR President) Fulton Martin <roseview@cts.com>, a Pfranc with the Purple Open Project. Cost MUCH less than what you can get from even the biggest dealers.