Motivation: The motivations for this series of dyno runs were several: first was to provide an interesting club tech session; second was to really get some actual numbers testing the validity of techniques that have been suggested to improve K bike performance.

Caveats: Lots of them: dyno runs are not a ‘precise science’ – I doubt if DynoJet, the manufacturer of the dyno we used (a new DynoJet Model 150) would claim a “run to run, day to day” accuracy of better than 5%. There are many variables effecting absolute accuracy in the relatively uncontrolled environment that this sort of dyno is used in. Humidity, air temperature, weight of the tester, tire temperature (which changes as the runs are done), tire diameter (which also will change with tire temperature) all can effect the absolute values obtained.

In an attempt to control these variables, each run done was followed by a calibration run – where the normal operating settings of the bike were used. If this calibration run agreed with what came to be called our “Stock Run”, the stock run was used as the standard against which the new run was tested. If it didn’t agree with our “Stock Run”; – we used the best match of 3 (where two runs closely matched) or new calibration runs (as in the section on engine timing).

Conditions and ‘stock settings’: Our test conditions were approximately 50 degrees Fahrenheit and approximately 30% humidity. The air temperature did change before doing the Engine Timing runs, so we used a new calibration run for this series of tests.

The settings used for the standard (calibration) runs are not BMW standard settings. The timing on this bike was set to 30 degrees BTDC. Standard (factory setting) is 24 degrees BTDC.

Controls: We only had one bike to work on the evening in question. This bike had 44,444 (exactly!) miles on it when it arrived on the dyno. It is running stock plugs with about 15 k miles on them (had a new set, but did not have time to change them – mebbe next time), using the stock filter with ~15 k miles on it (but we did tests of the filter vs. other and none).

All runs were performed by the shop owner due to insurance regulations, and because he knows how to do them. This does not constitute a classic ‘double-blind’ test – but it was the best we could do and should remove my personal bias from the results.

Run parameters and methodology: The variables being changed were selected specifically to determine numbers for each variable. We purposely did not combine changes, since interactions between them with a fuel-injected bike are unlikely and we were limited in the time we had to do all the runs.
In each case we attempted to make a change and then observe the results. If the results after a change appeared better, we would continue this change until the results stopped improving, or continued change resulted in worse results.

The specific parameters we were testing were:


We wanted to test the bike as it comes from the factory (with 44 k on it, and 13 years of aging), and then induce a leaner mixture and observe the power. This would give us a quick indication with this particular bike if it had aged towards a rich condition. To lean out the mixture – we used the high-altitude plug – which results in a ~10% leaner condition.

An interesting mixture test we did not do was to run the engine with a richer mixture. Thanks to an Email I got, this actually is fairly trivial to try – pressing the starter button while the engine is running will result in a ~10% enrichment of the mixture.

To further qualify the results – the actual mixture was measured with a gas analyzer, and the readings follow the mixture plot.

Conclusions: I’ll add my personal conclusions after I discuss each run and the results of the runs. These are MY conclusions and not to be taken as gospel. I’ve provided the graphs so you can draw your OWN conclusions.

This is the second dyno run report run on my 1985 K100RT (the FINEST year!)
Thanks to Jeff DeCarlo for the loan of his Luftmeister sport exhaust system, and for the sound level measurements.
Thanks to Sun Cycle of Manasquan NJ for the use of their dyno.
Thanks to Brian Curry for the loan of a spare L-Jetronic brain.

Calibration Runs
Chart 1: There are three horsepower runs illustrated in the chart above. Some explanation: 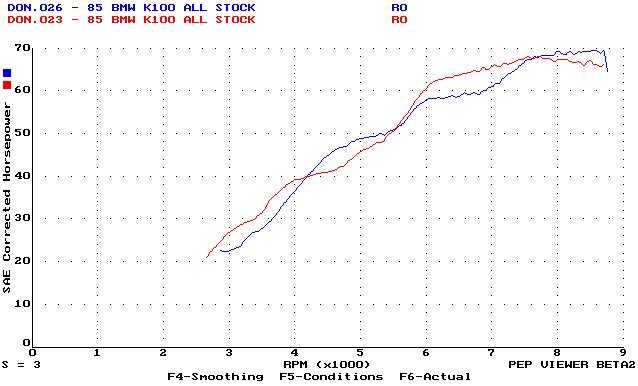 Chart 2: Stock System (run 23) vs Luftmeister (run 26) – Horsepower plot.
This chart should be self-explanatory. Over a wide range of RPM the Luftmeister exhaust resulted in less HP. It did produce a small increase in horsepower from 4,200 to 5,500 RPM and above 7,500 RPM, but the loss of HP at other RPM exceeds the gains for a net loss of power. 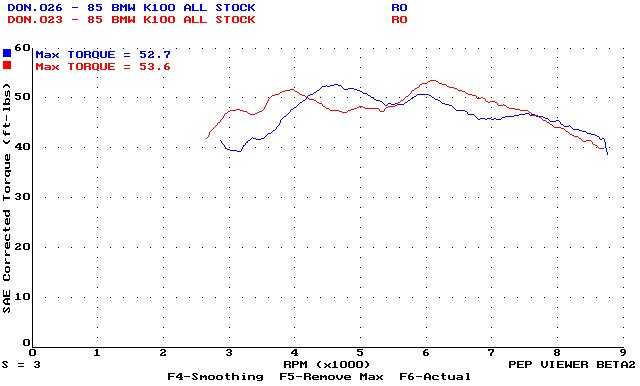