I’ll start this tech tip with a caveat. I’m not an instrument technician, and there are probably more elegant solutions to K bike tach problems, but this is what worked for me.

Two hours should be plenty of time to remove, repair, and replace the instrument cluster if no unusual problems are encountered. I have had experience with two types of K instrument clusters, which for convenience I call Early and Late. I’m not sure of the date that the Late cluster was put in production, but it can be easily identified by a pair of circular vents on the backside that the Early cluster lacks.

My ’86 K75 has had the usual intermittent speedometer problems since new and I learned to live with it, but then the tach began to hang up in the 2K to 5K range. 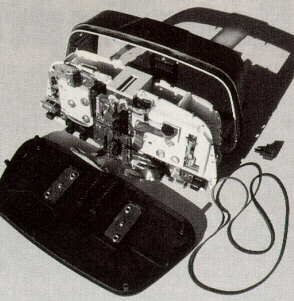 I was assured by a BMW dealer that the replacement instrument clusters were new and improved, so I bit the bullet and purchased a new one in February of ’94. The speedometer problem was solved, but about June of ’95 the new tach began acting just like the old one. I complained to the vendor that I bought it from, and was told that “sorry the warranty was only good for 12 months, and I was now four months beyond the expiration date.”

Fine-$543.28 for a new instrument cluster and it acts just like the old one I scrapped. Figuring there was nothing to lose, I did a post mortem on the old cluster to see what could be learned. It turns out that the face of the tach board isn’t supported on the upper left corner and after prolonged exposure to the sun (of which we have plenty of in New Mexico), it will warp up and bind the base of the tach needle.

Removing the instrument panel from the bike is a fairly straight-forward procedure, and there is a relatively extensive set of instructions on how to do it in the thick ClymerÌs K bike guide/ manual.

Once the cluster is sitting on your work bench begin by removing the tripmeter reset knob. Pull straight out on the odometer knob until it comes off in your hand. If you have the Early-type, just pull off a circlip and the end of the knob as seen in Photo #1. If you have a Late-type the reset knob with black bushing will come out as a unit.

Remove 9 long screws from the perimeter of the back cover, but do not remove the 2 flat-head screws that are under the tape in the center. Gently remove the back cover by pulling straight up, being careful not to damage the rubber gasket.

Take out 6 short screws holding the instrument board to the front cover and work the board out of the housing. Do not lose the circlip, a spring, and a flat washer that will be floating around loose inside on the Early-type clusters. 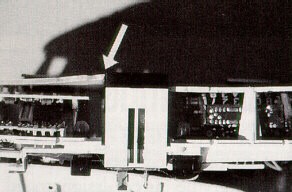 When the instrument board is removed look for any warpage as seen in Photo #2. My fix was to glue two 1/4″ thick pieces of dense rubber inside the upper left corner of the tach where the tach face will contact it (Photo #3) and push it back into position. This resolved the problem with my Early-type tach. 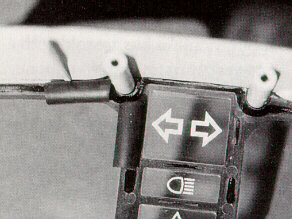 The Late-type tach had a similar, but different, problem in that the tachometer board was flat, but the tach face is printed on an applique that had warped up and was contacting the tach needle. I glued the applique back down to the board with some 3M weatherstrip adhesive.

Before reassembling the Early-type instrument cluster, pop out the bushing where the odometer reset knob goes through the case. Assemble the reset knob with the bushing, the flat washer, the spring, and then the circlip. Replace the board in the front cover making sure it is fully seated and screw into place. Pop the odometer reset knob in the case after making sure the stem of the odometer is lined up with the slot in the knob. Replace the back cover, being careful not to bend the pins that protrude through it, and don’t forget the cover gasket. Install the panel on your scoot and it’s time for a test ride.

This article originally appeared in the April 1996 issue of BMW Owners News.